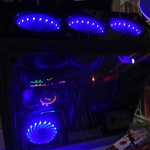 Hi Boost Mobile,
I have a Motorola Z3 Play unlocked that I bought from BestBuy. It was activated there as well. The problem is that it randomly says invalid sim card. Other times when I'm on wifi, if I'm searching something it will not load. The wifi icon will still show a strong signal. To fix that issue I have to keep toggling off WiFi and then turn it back on. After sometime it will say invalid sim card. Do you know of any fixes for this or know of it's a common problem? Also I have updated the software twice already to see if it would fix anything but it's the same. There are still updates for the phone, should I install those and see what happens? Thanks 🙂

Greetings, here is an update as of today. The invalid sim card is no longer an issue. The system updates fixes that. The wifi is still an issue but not as bad since I've done all the updates. Occasionally I will have to toggle the wifi off an on to continue surfing the net or using apps like Instagram, etc.

I researched more about this phone online and there are people experiencing the same issue with the wifi not functioning. It is a known issue with the Moto Z3 Play, so it has nothing to do with Boost Mobile or Sprint network.

Overall it's a great phone and is compatible with your network. Boost Mobile 4g LTE service is excellent for my experience. So for anyone who does buy this phone, it is important for them to do all system updates. The only issue users will have is wifi and the temporary fix for that is toggling wifi off and on until Motorola releases an update to permanently fix that issue.

Hi there, @Spiritualmystic! Did you use the eligibility checker to get a compatible SIM card here at https://activate.boostmobile.com/bring-your-phone?

I read a few months ago that the phone is compatible with boost mobile (on the boost mobile community an agent confirmed it). It works on Sprint as well. The sim card was purchased at BestBuy (boost mobile sim card kit). I have no problems with the network, it just at random times has invalid sim card. It reconnects and all works great until it decides to do it again.

Understood. Please, send us a private message with your phone number, PIN code, MEID/IMEI number of the phone, and the ICCID/SIM card number to further investigate.

Thank you for the great customer support. Here is what I did so far. I've done all of the software updates for the phone, restarted the device, removed the sim card (clean the terminals), and set mobile preferred network type lte recommended. So far I've not experienced any invalid sim card or wifi issues.

@Spiritualmystic: That's great! Thank you for keeping us updated. If you have any other question or request, feel free to let us know. We're here to help!